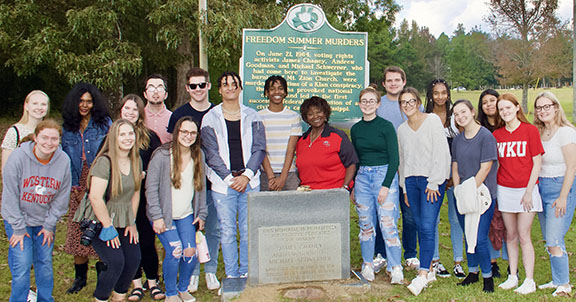 In an era where journalists face unprecedented criticism from the public, student journalists need a better understanding of digging deeper into issues and to know the extent of their First Amendment rights.

The course, established through an endowment donated to the SOM by Louisville media law attorneys Jon Fleischaker and Kim Greene, is taught fall semester of each academic year for junior or seniors, who apply for admission to the class. Thirteen students completed the course in fall 2021, five from the Political Science Department, five SOM Journalism Majors and three SOM Broadcast Majors.

Fleischacker said he and Greene wanted to establish a program that “encouraged very aggressive journalism” and was “important to the state of journalism.” He said the WKU School of Media and its journalism majors are “the best in the state” and “one of the best in the country.”

“It still was very important that reporters and others are very assertive and aggressive and stand up for their rights and try to get the story,” he said.

Mac McKerral, a journalism professor and the Journalism Major coordinator in the SOM, teamed with Scott Lasley, who heads the Political Science Department, to teach the class that focused on voting rights issues.

In past versions of the course, journalism professors have taught with professors from departments such as sociology and history, and focused on topics such as politics and the presidency, and the First Amendment and social media issues.

McKerral said the class gives students the opportunity to “produce a body of work” and “get reporting experience and do scholarly research in a specific area.”

Lasley said the importance of teaching voting rights studies particularly is that the First Amendment is the cornerstone of the Bill of Rights and is fundamental for the study of both politics and the media.

“It is an opportunity to incorporate high impact practices in an interdisciplinary setting, which is valuable,” Lasley said. “It brings together motivated students who otherwise might not cross paths, which provides new perspectives and approaches for looking at (voting rights) issues.”

Similarly, McKerral said the course provides students with exposure to other students from outside their major, their ideas and what these students learn in their respective courses.

In terms of teaching voting rights specifically, McKerral believes everyone should “always be concerned about their individual rights” as well as the “responsibility and accountability that comes with exercising those rights.”

“In the context of currency, speech is never free — it has costs,” McKerral said. “I think the framers of the Constitution, when they embedded a free press and free speech into the Constitution — I’d like to think they were operating from the premise that people would be civil, and that they would understand that there might be times when their freedom could certainly encroach on someone else’s and that those differences could be resolved.”

Fleischaker said that while he believes First Amendment studies have always been paramount, the topic is even more important now because journalism and journalists are now involved in a “real fight” on First Amendment and media rights such as access to open records and transparency.

“It’s really important that those who go into journalism understand that they don’t have to just accept what government officials tell them,” he said. “They have rights, along with those rights, they have responsibilities, but they have rights. A governor or mayor or school superintendent just can’t say ‘No’ to that.”

Students in the course experienced firsthand the significance of voting rights issues on a trip to Philadelphia, Mississippi, located in the historically important Neshoba County in October, and to Jackson, Mississippi.

In 1964, James Chaney, Andrew Goodman and Michael Schwerner were murdered in Philadelphia as a result of their participation in Freedom Summer, an event that cast Philadelphia as a historical center in the attainment of civil rights for African Americans.

Students spoke with those impacted by the events of Freedom Summer and the murders, as well as visiting Mississippi’s state-sponsored Civil Rights Museum.

Junior Elizabeth Cheshire, a broadcasting major and athletic coaching minor from Tampa Bay, Florida, said she learned about key events in the fight for Civil Rights in the South and about aspects of history she was unfamiliar with on the field trip.

“This course impacted my broadcasting experience because it gave me an opportunity to really learn and cover topics I’m not familiar with and are out of my comfort zone,” Cheshire said.

For Auburn, Kentucky senior Ashlee Gilbert, a criminology major with minors in political science and legal studies, the biggest impact of the Fleischaker-Greene class was observing the real-life effects of the Civil Rights Movement.

She said the trip presented political science students with a rare opportunity outside of analyzing studies, surveys and articles to “observe the tangible factors of the voting struggle.”  These factors included the testimonies of those involved and the small-town setting in which the events of Freedom Summer and the tragedy that followed occurred.

“Our trip and subsequent speakers helped us to put our academic observations into perspective and to create a whole, cohesive story of the struggling for voting rights,” Gilbert said.

In preparation for the field trip to Mississippi, students in the course read “Vote for US” by Joshua A. Douglas and “She Votes: How U.S. Women Won Suffrage, and What Happened Next” by Bridget Quinn. Both books were selected by McKerral and Lasley in accordance with the chosen course topic.

“I landed on voting rights as a topic for two reasons: the anniversary of the Suffragette Movement and because as the class has shown, it is a topic that has prompted a national debate and debates in many states,” McKerral said. “It lends itself to reporting and research, and it has a clear connection to the First Amendment.”

Class discussion is a large part of the Fleischaker-Greene course. Students regularly debate their political views on a wide range of topics, such as whether voting laws should be stricter or more relaxed, and whether those laws should be established federally or by each state.

“It is enjoyable to watch how students with strong opinions, varying experiences and different approaches interact with each other,” Lasley said.

McKerral attributes the great class environment to having excellent students with diverse perspectives and a willingness to learn from one another. The students are prepared for weekly class objectives such as having class discussions over the assigned reading and having questions for guest speakers.

“All those discussions have always been civil — even when people widely disagree on a particular aspect of voting rights, or whatever the case may be,” McKerral said. “That’s professional behavior that I admire in students.”

Sophomore Lucy Rutherford, a journalism and political science double major from Nashville, Tennessee, was raised by two attorneys and learned to enjoy debating.

Rutherford sees a positive in that she can fearlessly voice her opinions and take a stand for her beliefs, but she said also that she seemingly “tend(s) to get worked up” and that it can make having a discussion with her “difficult” in the minds of others.

“Over the course of this class, I have had to listen to a lot of opinions I disagree with,” Rutherford said. “My initial reaction is to hop on the defensive (side) and shout them down until they give up.”

Rutherford said she learned that “not everything is a competition” from her experience debating in the Fleischaker-Greene course.

“If I try to make every conversation I have into (a competition), I’m doing both parties a huge disservice,” Rutherford said. “Neither of us will know why we hold the opinions we we do unless we confront ideas that challenge us.”

For their part, Fleischaker said he and his wife Greene have been extraordinarily pleased with the high caliber of the classes and students selected for the course, as well as the level of enthusiasm students have for the work they produce.

“It has been a very rewarding situation for us, and that really makes it a win-win situation,” he said.

Fleischaker said he remembers students as “aggressive” about their work in journalism as a profession.

Fleischaker said he believes that to be a good reporter, a person must be “willing to challenge people.”

“(My) greatest takeaway is that voting is a bigger issue than I realized, and not every dynamic is black and white,” Cheshire said. “A lot of things are up for both interpretation and (are) partisan.”