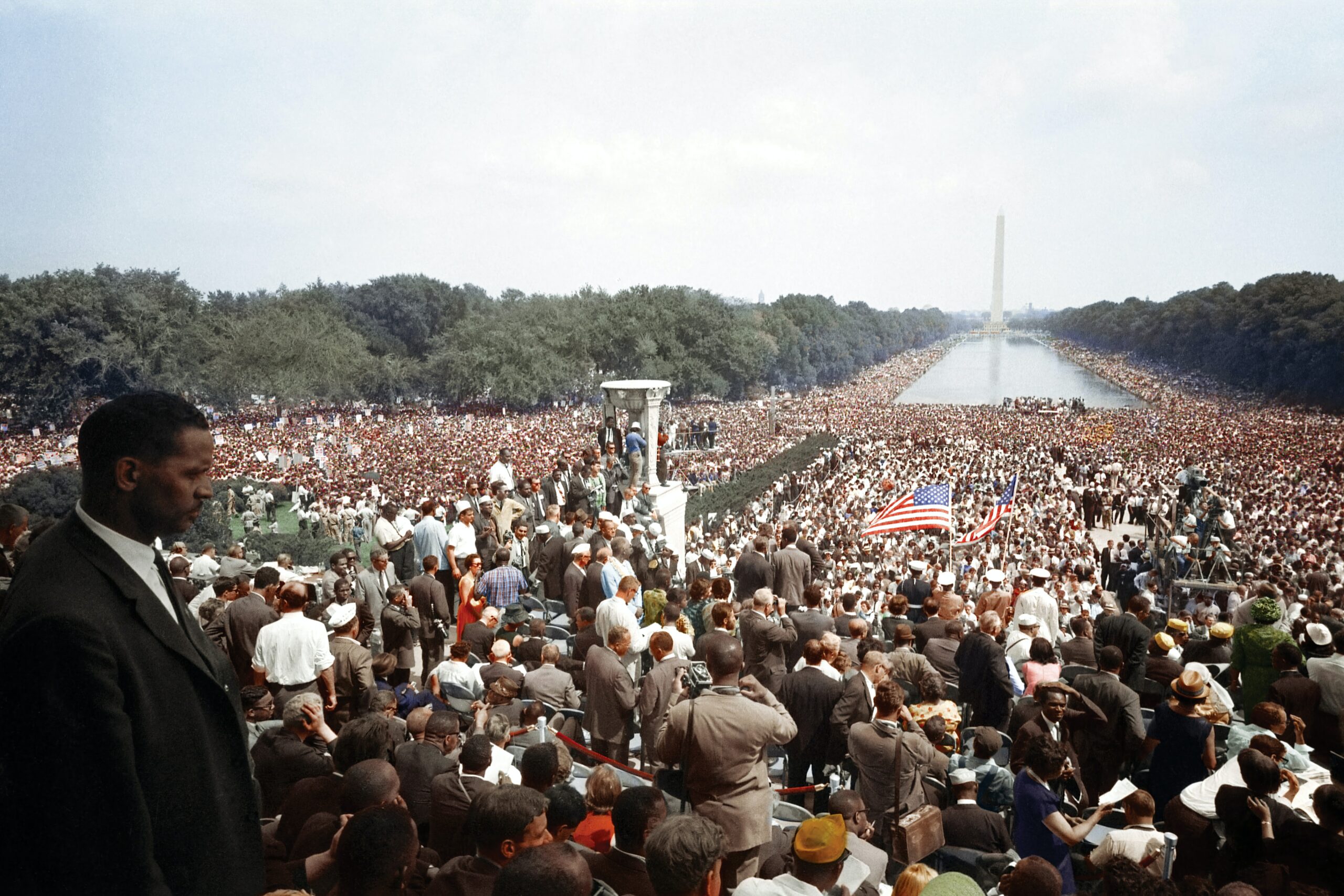 Editor’s Note: Music helped unite thousands during Civil Rights Era marches and protest such as this march on Washington, D.C. (photo above), and that theme continues today.

Their deaths became the focal point of what became known as the Freedom Summer, an effort by the Student Nonviolent Coordinating Committee (SNCC) to recruit college students to come register black voters in the South, an effort Goodman, Schwerner and Chaney helped lead.

For six weeks, their friends and family had no idea what happened to the men — until Aug. 4, when a tip to law enforcement led them to the bodies buried near an earthen dam.

Folk singer Pete Seeger was performing a concert to SNCC members in Mississippi when he has handed a piece of paper with the news.

The fight for equal rights, and especially voting rights, was a bloody battle. People were alienated, beaten and abused. Protests occurred under threat of death. At times the only thing they could do was sing. In times of both fear and celebration, people turn to music.

“Alabama’s gotten me so upset

Tennessee made me lose my rest

Saundra Ardrey, a professor of political science at Western Kentucky University, was raised in the thick of the Civil Rights Movement. She grew up marching and protesting with her father in Greenville, North Carolina. It is her belief that the music “kept her alive.”

“One of the things that we did learn is when we were getting ready to go out to demonstrate and to march, you know, we’d always be singing songs, certain songs they would teach us because it gives you something to do while you’re marching, so that you’re not so afraid,” said Ardrey.

Her feelings aren’t just conjecture. Scott Harris, head of the department of music at WKU, said they’re rooted in fact.

“I think music is very intrinsic to our lives as human beings,” Harris said. “And many studies have demonstrated that physically, certain types of music also can influence mood and even behavior. And sometimes in a negative light, but hopefully, mostly in a positive light.”

Harris and Ardrey both described music as a connective fiber for many different social movements.

“And one of the reasons that we use it, not only to inspire people and to get that emotional connection and that group identity, but it’s also one of the first one of the preconditions for a social movement,” Ardrey said.

“They’re like four of them, but one of the first conditions that you must have before movement starts is something we call shared grievances” said Ardrey. “One of the ways that you connect those shared grievances, instrumental in that, is music — to be able to sing about it.”

There’s too many of you crying

For many black Americans, the sharing of those grievances occurred in the church — one of the few places they could share a sense of community.

“There were only two places that black folks were sort of allowed to go without sort of white supervision and that was the church and the schools,” Ardrey said.

“And so, in the church then the black church, we had the spirit was going on. And so you sang these spirituals while you were sort of making signs and developing strategies and plans for the protest movement.”

Prior to the end of slavery, this same sense of community was found in the fields.

Many of the songs sung in church found their roots in this “field music.” One was “Oh Freedom!” — a spiritual thought to have been written at the end of the slavery era.

“And before I’d be a slave, I’ll be buried in my grave,” is the chorus.

For Hezekiah Watkins, a former Freedom Rider and lifelong activist in Jackson, Mississippi, these are lyrics that have remained with him his entire life.

“They were with me then, and they’re still with me to this day,” Watkins said. “I haven’t forgotten it.”

Watkins was arrested more than 100 times for his work as an activist. His first arrest occurred at age 13, and after that arrest he was transferred from the jail in Jackson to Death Row at the state prison in Parchman, Mississippi, where he spent five days.

It was a terrifying ordeal and for Watkins, part of the courage he found came from the music he and his fellow protestors would sing together.

“I’m not going to say I wasn’t afraid, because I was each time I was arrested,” Watkins said. “But I went on and something just kept pushing me. Music was a form of protest in itself. It gave you the courage.”

He has written a book about the experiences he had, “Pushing Forward.”

“And how many years can some people exist

Before they’re allowed to be free?

Yes, and how many times can a man turn his head

And pretend that he just doesn’t see?”— “Blowin’ in the Wind”

For Ardrey and Watkins, their experiences in the fight for equality were shaped by music. It gave them a place of refuge and courage but also a sense of connected identity.

But the music reached outside the black community as well.

Popular music in the 1960s reflected many of the feelings of injustice. Bob Dylan’s “Blowing in the Wind” is one of the most prominent examples.

Released in 1963, it reached No. 2 on the Billboard Pop Charts. The song consists of Dylan asking how long it will take for people to be free. For white kids growing up in the Civil Rights Era, pop songs often became the way they learned about the fight for equality.

That’s how it was for Frank Wesley, an artist currently living in Kentucky who grew up in Memphis during the Civil Rights Movement.

Wesley’s mother was a nurse who saw her coworkers gather in the parking lot after work to plan demonstrations. His father was stopped after the shooting of The Rev. Dr. Martin Luther King, Jr. for matching the description of King’s assassin. But his true exposure to civil rights came through music.

“There was the Marvin Gaye song “What’s Going On” about the protest and some of the mistreatment of people and you would be aware of, you know, a lot of it through things like that,” said Wesley.

“It’s been a long

When Freedom Sumer took place in 1964, it relied on uneasy alliance — the ability of white and black students to cooperate and work together. More than that, it required white students to live in the homes of black Mississippians. Many of the white students never experienced anything like it.

But they found common ground, often with music.

In 1965, Congress passed the Voting Rights Act. It outlawed many of the discriminatory practices Southern states used to prevent black people from registering to vote. It did not end the Civil Rights Movement. But the milestone legislation helped push it forward.

In the recent months, some states have taken steps to make it difficult to vote. What Watkins describes as the reinstating of “Jim Crow Law.”

Today, the same battles for equality fought in the Freedom Summer are fought again.

However, the fight looks much different than it did during the Freedom Summer.

“It’s night and day,” said Watkins. “Nothing looks like it did back then.”

Music as a form of protest is less prevalent now, but Ardrey believes it still exists in some ways and that its still being used to spread the same message.

“My favorite saying is the more things change, the more they are the same,” she said. “And so I think the music reflects that when you look at the lyrics. And when you get down to the substance of it, it is the same thing we’ve been talking about since the ‘60s.”