“Cancel Culture” is here to stay 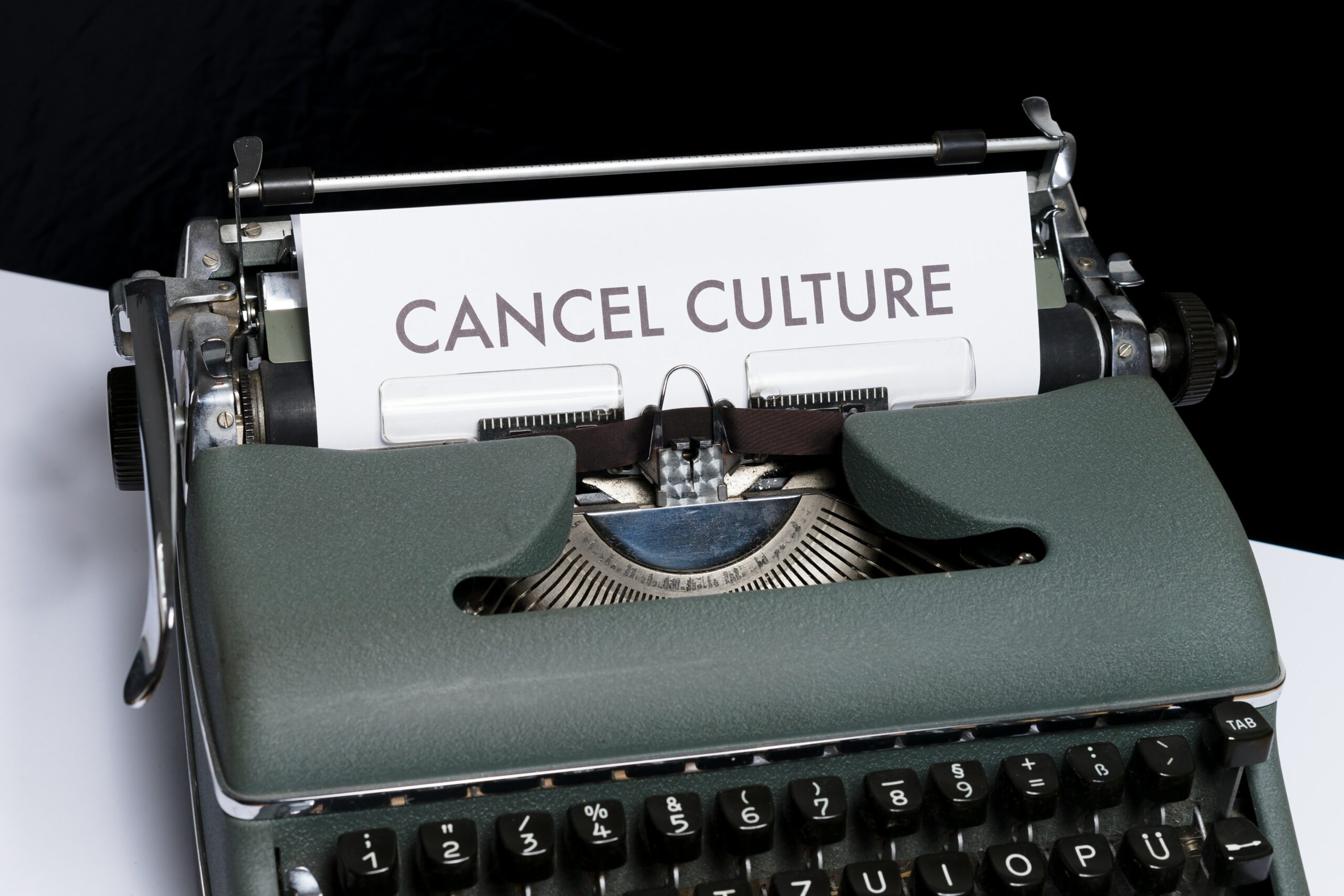 Payton Bingham sits aloft on her bed along with her fat speckled cat, Misty Minerva McGonagall.

On either side of her, “Harry Potter” posters are carefully taped to the walls. They accompany the various Potter stickers adorning her laptop and Potter cutouts on her Resident Assistant in-and-out board at Western Kentucky University.

Bingham, 19, a WKU student from Pineville, Kentucky, says her love of the Potter series dates to when she was 10. Bingham quickly fell in love with the series because, with every book, she grew up with Harry.

And she loved the writing.

“My mom was a big fan of (the Potter books), and then I was just a big reader,” Bingham said. “She had the books at the house, and I just picked them up and started reading, and I loved it.”

Despite that love, Bingham decided to ditch Potter author JK Rowling — a contemporary spin on an age-old practice called “canceling.”

For Bingham, the divorce of Potter from his creator JK Rowling came with the controversy over Rowling’s “transphobic” comments on her Twitter feed. The author — in and out of the news — spoke against the transgender community on Twitter on multiple occasions, including voicing support for Maya Forstater, a woman who sued after losing her job due to posting transphobic comments on Twitter, and critiquing gender-neutral language.

Now Rowling faces criticism for her new installment in her private detective series and its central character Cormoran Strike, the book “Troubled Blood.”

The story centers around a man who dresses up in women’s clothing to infiltrate women’s spaces and kill them. Jake Kerridge might have put it best in his review for The Telegraph in London, writing that the moral of the story seems to be “never trust a man in a dress.”

Bingham stands among the ranks of many Potter fans who want JK Rowling “canceled” defined as “boycotting an actor’s movies or no longer reading or promoting a writer’s works.” Canceling has been a phenomenon in pop culture for some time.

Before they were canceled, celebrities would be “blacklisted.”

Blacklisting meant celebrities were no longer able to perform because their conduct outside of their art was deemed unacceptable. Blacklisting — an age-old tactic — took root in contemporary U.S. parlance — during the Cold War when the founder of the Hollywood Reporter, William Wilkerson, began publishing names of celebrities with ties to the Communist party.

Popular artists blacklisted during this time were actor Charlie Chaplin, who refused to co-operate when called before the House Un-American Activities Committee, and Langston Hughes, who was affiliated with several Communist linked groups and had his poetry featured in Communist papers.

Blacklisting is still a term used today but it paved the road for canceling.

Canceled would have been a great descriptor for the Beatles in 1966 after co-lead vocalist John Lennon claimed that the Beatles were “more popular than Jesus.”

Lennon’s remarks led to various radio stations around the country refusing the play the Beatles. Previous fans were setting up bonfires to burn their Beatles merchandise. It was not until his apology later in the year that the Beatles eventually regained lost put airtime.

Actress Jane Fonda was the center of American outrage in the 1970s for her activism regarding the Vietnam War. Fonda is no stranger to activism and remains involved today, although her opposition to the Vietnam War caused the biggest stir.

During an already controversial trip to Vietnam to see the damage of the war firsthand, Fonda went on several radio stations. She pleaded with American pilots to stop bombing and criticized politicians. This led to outrage among veterans and politicians alike, to the point where the Maryland state legislature considered banning all of Fonda’s films and her from the state.

Madonna is no stranger to controversy, either. In the 1980s, the star was denounced by Christian and Catholic groups nationwide and even the Vatican for her “Like a Prayer” music video. The video featured several burning crucifixes, Madonna in revealing clothing, and a scene in which Madonna makes out with a weeping saint statue. Groups protested the broadcasting of the song on public radio and boycotted the Pepsi brand when it’s producer, now called PepsiCo used the song in an advertisement.

The 1990s came filled with celebrity scandals and canceling.

OJ Simpson was tried for the murders of Nicole Brown Simpson and Ron Goldman, which cost him most of his acclaim and money. Former President Bill Clinton’s affair with White House intern Monica Lewinsky and his subsequent impeachment helped cancel him. And Woody Allen’s marriage to his former stepdaughter Soon-Yi Previn amid a sexual assault claim still haunts his image.

The 2000s and forward though have seen the biggest concentration of cancel culture thanks to the #MeToo movement.

Beginning in 2006 on Myspace, the phrase “Me Too” was used by sexual assault victim and activist Tarana Burke. It eventually became a rallying cry as more and more women came forward to call out those who had assaulted them.

This eventually made its way to Hollywood where stars like Terry Crews and Uma Thurman spoke out about sexual misconduct. They had experienced at the hands of the Hollywood elite. As stars began to be called out, many fans rallied for them to be canceled.

This canceling slowly evolved from sexual misconduct to transgressions such as racism, homophobia, transphobia and more. As canceling became more widespread, a culture began to form around it. People refuse to support any person canceled, no matter the time or severity of the infraction, claiming they should have no fanbase and they should not get money for their work. Others argue that you can still enjoy the content without endorsing the creator.

Another notable celebrity with cancel culture nipping at his heels is rapper and presidential hopeful, Kanye West.

West is no stranger to controversy.

His first scandal happened just after Hurricane Katrina in 2005 when on a live broadcast for hurricane relief West ended an improvised speech about the portrayal of people of color in media by claiming “George Bush doesn’t care about black people.” Since then, West has seemingly been surrounded by scandal.

From his interruption of Taylor Swift’s 2009 Video Music Award acceptance speech to the video for his song “Famous” in 2016 which depicted a host of problematic characters laying nude in bed, including Rihanna next to her abuser Chris Brown.

West’s most recent scandal has come from his abrupt 2020 presidential campaign where he claimed Harriet Tubman “never actually freed the slaves, she just had the slaves go work for other white people.” This comes a few years after West’s claim that slavery was a choice, saying in a TMZ interview “When you hear about slavery for 400 years … For 400 years? That sounds like a choice.”

Lyons’ first heard West’s music when her parents played it in the car. She quickly became a fan.

“It’s not really him but I like the way he uses metaphors in his music,” Lyons said.

Lyons finds West’s recent comments during his campaign problematic “in a way” to black culture.

“Saying stuff like that, it hurts our culture,” Lyons said. “You’re supposed to be on our side. What could he bring to the table, to the United States, as a president?”

In their song “Role Models,” pop band AJR details its feelings upon finding out that the celebrities they looked up to, including Kanye West, are not what they appeared to be.

The band wrote: “All my role models are on TV for the wrong reasons/And, I will unravel if you rip away my best pieces/Would’ve never come so far without someone there to start it/ Can I truly love the art when I kinda hate the artist?”

Melissa Baker, an assistant professor of Psychology at Western Kentucky University, sets the emotions aside and says “Confirmation Bias Theory” may be at the root of cancel culture. Baker describes the theory as “the tendency to just search for information that already confirms your belief.”

Baker said when people see a celebrity doing something they disagree with it is interpreted as an attack against one’s sense of self.

“To preserve that sense of self, people will act against people,” she said. “Celebrities are just a good target.”

Baker said cancel culture is visible on a macro and micro level.

Baker said that she does not “think anything is healthy to the point you shame someone,” but at the same time, it is still important to protect your sense of self.

When a celebrity says something or takes a stance we disagree with, Baker said it’s interpreted as an attack. She emphasizes though that “it’s important to hear arguments” and we should not immediately jump to canceling.

For Bingham and Lyons though, the time for arguments has passed.

Lyons completely distanced West from his music. He has options.

“Music is music,” she said. “What you do outside of music, that’s on you.”

But Lyons hopes that West may be able to make a comeback.

On the other hand, Bingham said she will never forgive Rowling. But likely she will enjoy the books and movies. She said if Rowling is going to continue to be “unbending” in her beliefs, the community should “just not let her voice be heard if it’s going to be harmful to others.”

“If a person is going to, over and over again, say these horrible harmful things then yeah, they do need to be canceled,” she said.

Baker warns that the aftermath of canceling may not be what is expected.

“Any celebrity is going to be more aware of the support they get on the issue,” Baker said, reminding those who cancel that “celebrities are people, too.”

Despite the canceling though, Rowling and West have both continued to flourish.

West’s latest album, not released in its entirety, has positive reviews. Many ranking it, and the only song released from it, better than his previous album “Jesus is King.”

West garnered a following for his 2020 presidential bid, getting approximately 60,000 votes and he gets many viewers for his Sunday services. The services, which before Covid, he held in person, garnered celebrity attention from Brad Pitt, Justin Bieber, and Katy Perry.

Despite some reviews put out before “Troubled Bloods” release claiming the narrative to be transphobic, the book has still sold approximately 65,000 copies and even got more five-star reviews on Amazon than its predecessor “Lethal White.” Rowling has also continued her transphobia, promoting the Wild Womyn Workshop on her Twitter recently — a store that specializes in products for “uncompromisingly radical” women. Items sold at the workshop include buttons saying, “Transwomen are Men” and mugs that say, “Notorious Transphobe.”

At its roots, cancel culture was meant to show celebrities they will be held accountable for their misconduct. Its evolution to boycotting content and removal of celebrities from their craft has proved fruitful in some cases and moot in others. Can we truly hold celebrities accountable? Can we ever really separate the art from the artist?

“People are entitled to their opinions and to voice them,” Baker said.