A night of a thousand dollys 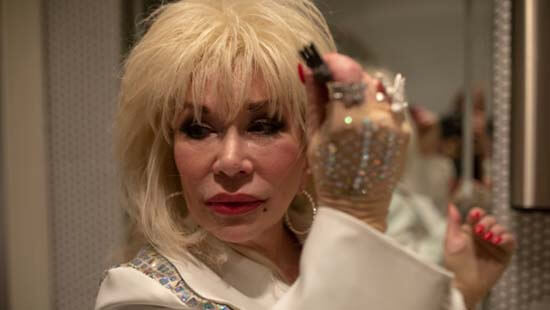 This fall, Dolly Parton celebrated her 50th anniversary as a member of the Grand Ole Opry. The impersonator Carla Jean Morgan is keeping Dolly’s image — and legacy in country music — alive on the party-town streets of Nashville.

Carla Jean Morgan comes driving down Lower Broadway in downtown Nashville in her red truck. The street is busy and full of lights, bars and dolled up bachelorettes getting their drink on. This is NashVegas, ground zero for country music and its fans, a place where T-shirts, cowboy boots and an atmosphere of picking — and lots of grinning — plays on, 24-7.

Even though she’s partially hidden inside the car, Carla Jean’s blonde wig makes people on the street take a head-turning gaze. That’s a feat if you consider the buzz and the cast of characters parading this flashy venue on a Music City Saturday night.

Could it be?  Fans look at Carla Jean and then look at each other with eyebrows raised.

“Was that Dolly Parton?” they whisper before taking another look.

Carla Jean’s truck takes a turn left into a parking lot. She opens the door and jumps to the ground before she puts on her black heals, a necessity for her outfit. In Dolly’s world, there are no flat shoes. And nearly everything has some sparkle.

Soon the crowd realizes – this is not the real Dolly, but it’s a pretty good Almost Dolly, as Carla Jean calls herself.

Carla Jean Morgan, 65, has stepped into her character and intends to stay there for the rest of the night. Her career is to impersonate the blonde megastar who is as close to Nashville royalty as they come. It’s almost like every other acting job, Carla Jean says.

Be true to your character.

Her part must be taken seriously, and Carla Jean’s Dolly is authentic. She wears specially tailored replicas of Dolly Parton’s original costumes brought in from England, and she owns 64 wigs that she keeps back home in Sevier County, Tennessee. She’s got Dolly’s bubbly laugh, her over-the-top makeup and larger-than-life lashes down pat. Dolly has always been in on her own joke.

And so is Carla Jean.

Tonight, Carla Jean wears a white leather dress with silver sparkles and gloves. They glitter in the glare of lights atop multitiered bars. Music blares. Everywhere. But it’s a fitting vibe.

To be Dolly Parton, nothing is subtle, Carla Jean says. Dolly is 73, but she is vivacious, true to her roots and timeless.

Carla Jean, as an impersonator, strives for the same.

She walks arm in arm with her husband, Jack Bullard. The two of them met in 2011 at a convention for impersonators. He’s a big man in a yellow jacket and Wayfarer sunglasses. He impersonates Jack Nicholson, and to be honest, he’s making that work.

When the couple met, it wasn’t love at first sight. Jack didn’t like Dolly Parton, but that’s a necessity if you want to love Carla Jean Morgan. You have to love Dolly Parton, too.

But “today I know more about Dolly than any other men in this world,” he says lovingly.

It’s perhaps an assignation that Parton’s real-life, out-of-the-spotlight husband Carl Thomas Dean might say about his very own Jolene.

And so they stroll, parting the crowds.

A weird celebrity vibe surrounds them, Dolly and Jack. People know that they’re not the real deal. But they still garner plenty of attention.

An older couple asks for a group picture. A woman looks at Jack and yells into his face: “Oh my god, are you Jack Nicholson?”

They walk across the streets, through the door of her favorite restaurant and sit down in a booth. She orders a cup of milk and a catfish sandwich — no bread just fries.

Neither drinks a lot of alcohol. In showbiz, you can do that as a rock star with an established image, but not if you’re an impersonator. It takes hard work to embody an icon with a buxom but wholesome image, Carla Jean says.

She earned a master’s degree in education psychology from the University of Tennessee-Knoxville, but a brain injury back in 1993 changed her life and career path drastically. One night in a restaurant, a TV became untethered and fell on her head. There was no blood to see, and the X-ray showed no bruises.

But the injury was life-changing.

Carla Jean ended up homeless and nearly suicidal, she says today. She lived in her car and scraped out an existence as she battled back to become the best version of her new self.

There were lingering impacts.

Years later, Carla Jean endured memory loss and completely lost her ability to play the piano, something she’d been doing since she could reach her grandmother’s piano in the living room.

Like the real Dolly, music was the connector with her roots.

A huge part of Carla Jean’s own identity fell apart in the years after she was hurt.

Music had, as for many others in Nashville, been a big part of her personality. She played concerts downtown and wrote songs, hoping to make a breakthrough in the country industry.

But she never did, and after the accident, she settled with the thought that it might never happen.

“It took a long time and a lot of anger to rehabilitate,” she said. “I don’t think I’m the piano player I used to be, but I can play again. My memory is still not that good, but I have managed to live with it.”

After the injury, Carla Jean somehow — in time — found herself again by looking and acting like her lifelong idol, Dolly Parton, whose own story comes framed with a similar resilience. The real Dolly grew up in a single-room cabin with 11 siblings. But she rose from the hard-scrabble of her youth to make millions of dollars and become a legend.

Carla Jean rose, too, acknowledging their similarities.  She always has been playing Dolly’s songs. Their faces bear a strong resemblance. Carla Jean made a good Dolly, she thought deep down, but at first, she said it felt wrong to pretend to be someone else.

“When you have an idol that means that much to you, as she means to me, it will be almost blasphemy — like pretending to be God,” she said. “I know it sounds stupid.”

Her fascination started in her teenage bedroom back in Wisconsin many years earlier, but she never imagined she could make a living out of impersonating someone else, let alone a musical icon.

At a look-a-like contest in Knoxville, Tennessee, in 2012 she put her Dolly on for the first time, as she calls it. It was a bold move, and it wasn’t her intention that night. She just wanted to listen in, but more and more people came to her and asked if she was going to be in the contest.

“I had been in show business before, so I went home to pick up a wig and some showy clothes that I had already,” she said. “I did my best to look as Dolly-like as I could, and when I went back to the bar and onto the stage, I sang. It was the kind of contest where the applause of the audience decides the winner. When it came to me, they just kept cheering and cheering.”

At midnight, in a kind of reverse Cinderella-like fashion, she won the contest, called “A night of a thousand Dollys,” and a transformation occurred.

Afterward, she kept saying to herself that people must have been too drunk to vote for another. But her heart offered the inkling that she could pull off playing Dolly.

It wasn’t until a former colleague, Sheila Kelly, took Carla Jean to a concert in Dollywood in the Great Smoky Mountains, that Carla Jean finally found the courage to embody this character fully.

And this was the first time Carly Jean met Dolly in person.

The two colleagues ended up winning a lunch and a meet and greet with Dolly. The meeting made Carla Jean a little nervous. She remembers being totally unprepared, dressed as she was ready to ride a roller coaster, and spilled ketchup all over herself. No makeup, no wig.

“Dolly just looked at her and said, ‘Well, we could be sisters,’” Carla Jean’s friend Sheila Kelly said. “I think it’s her light skin that makes her look so much like Dolly.”

Kelly told Carla Jean that if the real Dolly thinks they look like each other it must be true. And since that day, Carla Jeans’s version of Dolly starting getting booked for more and more shows.

Today she makes a decent living out of it, acknowledging “you have to be a little crazy to do this.”

In the restroom in the back of the restaurant, she pulls out her toiletry bag and gently puffs her hair with a comb. Big hair is Dolly’s signature look, and it requires some maintenance.

Carla Jean puts more lipstick on. Big makeup is also a Dolly trademark. Usually, it only takes her 30 minutes to go from Carla Jean to Dolly. The breasts — perhaps Dolly’s signature accoutrement — are there already, she says and points at her upper body.

Dolly, she acknowledges, provided her comfort about her looks when she was coming into her own as an adolescent. The shyness that came with the development of her body made her look to Dolly and find acceptance — that is was OK to somehow look a little different. Dolly made her boobs her signature. Carla Jean would make peace with her own bounty, too.

And maybe that is part of Dolly’s charm.

The country star exudes an overwhelming confidence, and that’s how she became so embraced by so many different groups. This includes many in the LGBTQ-community, whose own search for acceptance amid differences parallel Dolly’s journey from holler-dweller to hillbilly fame.

For Carla Jean, her drag friends helped her find her perfect Dolly-look. Dolly has said that if she was born a male, she would be a drag queen.

She loves glitter that much.

“Dolly never makes any excuses for who she is,” said Carla Jean.

And neither does Carla Jean Morgan as herself.

She leaves the restaurant, and walks back into Broadway’s almost electric neon vibe. Immediately, two girls in cowboy boots come up to her. Carla Jean, in character, wears the attention like a real celebrity.